Hello, all:
A lot of activity for a Sunday!  We started the day by reassembling the L-33, which was recently returned from the soaring competition in Yoder, KS.  Suffice it to say that the weather in Yoder was not perfect for soaring.  The competitors did what they could, but there were days that were complete wash-outs, and on days they did fly, there were a lot of land-outs, including Bob C. in the Russia, and Bob D. in the L-33.  This was the first time in 40 years of soaring that Bob C. has not made it back to the airport.  Bob D. has landed out before, but this was the first land-out for the L-33.  Once the L-33 was reassembled and moved aside, we were able to begin flight operations.
. 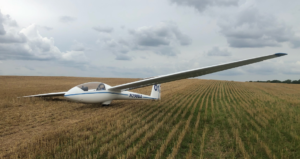 The L-33, sitting in a Kansas wheat field, awaiting retrieval after a land-out.

.
We had eleven flights yesterday, with many of the flights lasting close to thirty minutes.  Because of the length of the flights, we were at the airport later than usual – we didn’t leave until almost 6PM.  Steve R. started the day with a FAST lesson for Hannah M., the 14 year old daughter of former club member and current FedEx pilot Bill M.  Bill last belonged to OSCI fifteen years ago, and has recently returned to Omaha.  Will he rejoin OSCI?  It remains to be learned, but they’ll be back, as Hannah has one flight left on her FAST kit.  After Hannah’s flight, Steve flew two lessons with Lexy H.  We launched Bob D. in the L-33 between Lexy’s flights, and Bob was gone for the next two hours.  Bob said he flew over Lake Bennington, Kennard, and Blair.  Steve gave a ride to the wife of a friend of his, and Jay B. was launched in his Russia for a 30 minute flight.  John H. and Steve flew a lesson, and then Jaime A. and Warren P. flew a lesson.  John and Steve flew a second lesson, followed by Jeff F. and Steve, and Warren and Steve doing pattern tows to work on cross-wind take-offs and landings (the wind was almost a direct crosswind, and was gusting to 19 knots most of the afternoon).  Warren is very, very close to soloing.  Frank did all the towing.
Thanks all.
Tom S.