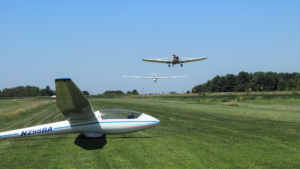 The Pawnee, towing the L-23, approaches the L-33 during a smooth take-off.

.
Hello, all:
.
Even though we had to end flight operations earlier than normal, we still launched twenty-one flights today.  We also have a new club member, Rich M.
.
I flew the first flight of the morning with a solo flight.  Then, the CAP Cadet orientation flights started, and we completed sixteen of these flights before regular club flights began.  John H. flew with Dan P., and Jeff F. was launched in his 1-26.  Jeff found enough lift to get in a 30 minute flight.  Dan then took Rich M. for a flight.  Rich is a a 22 year veteran of the USAF, he has approximately 500 hours in gliders, and he used to teach soaring at the USAF Academy.  Welcome to OSCI, Rich!  Meanwhile, Bob D. took his son Alex for a flight, and Bob A. flew the hangar flight in the L-33.  Frank towed the morning shift, and Whit and Bob D. towed afternoon shift.
.
Thanks all.
.
Tom S.