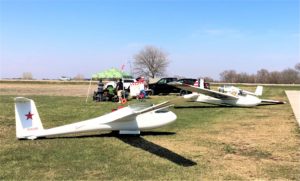 It was a beautiful day to fly, and it was a busy day, too, with 15 flights completed.  The first two flights were Lexi H, with Steve R. instructing.  Jay B. was launched in his Russia between Lexi’s two flights.  Steve gave a ride to a friend of his, and then Bob D. completed his Safety Flight with Steve.  Steve took a break while Dave L. flew a solo in the L-23.  After Dave’s flight, Mark B. flew with Steve, and then Bob A. flew with Steve, completing their Safety Flights.  Jeff F. flew with Steve, where they practiced simulated rope breaks (getting the nose down and the speed up to 55 knots while making a quick 180 degree turn).  Jay took his Russia up a second time and found enough lift for a 55 minute flight.  Jeff and Steve flew a pattern tow, and then Mark B. flew two more training flights with Steve.  Bob D. spent part of the afternoon assembling his Russia, which he took up for a flight late in the afternoon.  Tom S. flew the hangar flight.  Frank M. did all the towing.

Of interest was the birds nest that was found being built on top of the Pawnee’s engine.  The birds must have gotten in through the openings in the nose of the aircraft, and they’d made a mess in there.  Cleaning the nest out of the engine compartment took about twenty minutes.  Until a way is found to block the birds from trying to build another nest there, this may become a weekly task.

Thanks all, and Happy Easter!