Hi All,
A great day today!  Steve R. soloed John H. and Warren P.  Congratulations to John and Warren!
First up was John for two pattern tows, and then Steve let him fly out of  the nest.  John then did a second solo flight.  Steve then took Warren up for his final prep flights including a simulated rope break.  The next flight, Steve booted Warren out of the nest for his first solo flight.  Warren followed that up with his second solo flight.  Bob Craig took Jacob M. up for a lesson, and then I did the hangar flight.  Frank did the towing. 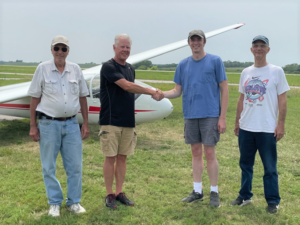