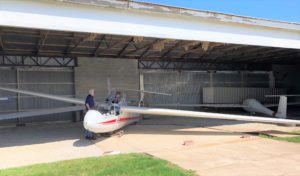 Getting ready to pull the L-23 out of its hangar.

Hello, All:
It was another busy day, with 12 flights completed.  Jim C. was up first with Bob C. for his Safety Flight.  Jim didn’t stay long; he had to rush off to wash his pickup (joke).  Next up was Bob C. instructing Lexy H. for another lesson.  Then, Kubra flew her second FAST Kit flight with Whit B.  The lift was good, so we launched Jake K. in the L-33, followed by Bob D. and then Bob C. in the two Russia gliders.  Warren P. flew a flight with Whit instructing.  Whit had Warren follow the tow plane using the rudder only, without using the control stick.  Warren reports that that was a challenge, and with the gusty winds, it had to have been.  Joseph, a paid ride, flew with Whit, and then John H. flew his second FAST Kit flight, also with Whit.  Jeff F. went up in his 1-26 for a solo flight, and Tom S. flew a solo L-23 flight.  Finally, Whit flew with Dan P. so that Dan could complete his Safety Flight.  Frank did all the towing.
Jake, Bob C. and Bob D. were each aloft for between two-and-a-half to three hours, so the lift was certainly strong today, just as Bob C. had said it would be.  At one point, we had five gliders in the air, which doesn’t happen very often.  It was a good day for soaring!
Thanks everyone, for another successful and safe afternoon!
Tom