Before starting the latest Soaring Report, I’ll talk about what a nice Friday evening we had as we celebrated numerous achievements so far this year.  We rehabbed the Omaha Soaring Club meeting room at KBTA.  We soloed a new member.  We had five members pass their Practical Exams, earning their Private Pilots Licenses.  And, we now have the use of Bill S’s Schweizer SGU 2-22 two seat glider.  So, we had a cookout to celebrate.  A big thank you goes out to Bob A and his daughter for getting the room set up and cooking the burgers and hot dogs.  It was a nice evening with a nice turnout! 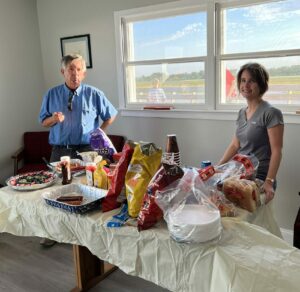 Bob A and his daughter.

And now for the soaring report.  We flew 18 flights today.  Dan P. started with a ride for a friend, followed by Steve R. with two lessons for Lexi and one with Jim.  Dan and Steve then took up the Schweizer 2-22 for its first club flight in a few years.  After that, Dan did a FAST Kit lesson and then he took Andan S. for a ride in the 2-22.  Dan did a couple of lessons in the 2-22 with Liam S. (our second Liam).  Steve flew a paid ride and a FAST Kit flight.  Dan flew a “C” badge precision landing flight with Jeff F, which completed his ‘C’ badge requirements.  Congratulations, Jeff!  Next, Bill S. took his son Andan for a ride in the 2-22.  Steve and Dan did another 2-22 flight, and then Dan checked Jeff and I out in the 2-22.  I did the hangar flight in the L-23 to end the day.  Both gliders got good usage today.  Bob Dyer did all the towing.