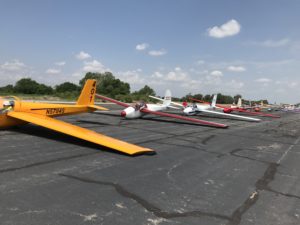 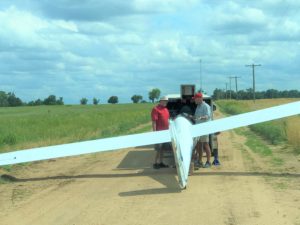 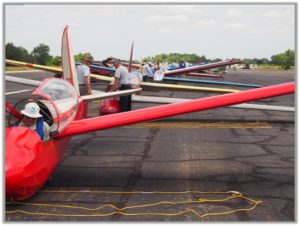 It was a busy day at BTA, with thirteen flights.  Flight operations started with Dan P. giving rides to two of the CAP Cadets fathers.  These two flights were followed by five CAP orientation flights in a row. 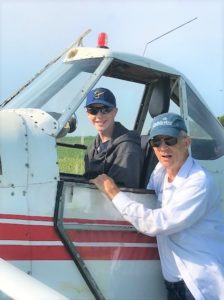 Frank M, our Chief Tow Pilot, (and a retired USAF B-52 pilot) showing a CAP Cadet his ‘office’, the cockpit of the Club’s Piper Pawnee PA-25 tow plane.

Jeff F. took his 1-26 up between the third and fourth CAP flight.  Jeff reported that it was a beautiful morning to fly, with silky smooth air, and comfortable temps aloft.  There were two more paid rides, with Joe and Jason – they each had big smiles on their return.  Jeff flew a second flight in his 1-26, and then Jamie A. and his son Jeff A. took a flight in the L-23.  Jeff F. flew the final flight for the day in his 1-26, and found enough lift to stay aloft for 30 minutes.

Of note was that Jaime A. and his son Jeff arrived at BTA in Jeff A’s Cessna 180, which Jeff flew to Council Bluffs from Denver, where he’s a pilot for Untied Airlines.  This was Jeff’s first glider flight in 27 years.

Also of note was that Jay B. came out mid-morning and reassembled his and Bob C’s Russia, which they’d taken to Hutchinson, Kansas last week for the ‘1-26 and Low Performance’ glider competition.  Jay, Bob, Bob D., and Jim C. spent a week at the Sunflower Gliderport competing.  Conditions for gliding were not ideal, but they had a very good experience while they were there.  Here’s a link to a nice video about the competition:  1-26 Championships The photos above are from the trip.  Two are of the ‘grid’, taken just prior to the gliders starting to be launched for the day.  The middle photo is of Bob D. and Jim C. taking the L-33 apart after Bob had to ‘land out’ during the competition.  Bob C. had to land out in the Russia earlier in the week.  Kansas is a fine state to land out in!  There are lots of flat fields available, especially after the wheat has been harvested.

It was another great day of flight operations.  Dan did the instructing, and Frank M. did the towing.

Thanks all, and have a nice July 4th!