Hi, All:
We’ve been very fortunate to have had three decent soaring weather days, considering that it’s still late winter/early spring.  Two of those days have had good thermals, plus they were weekend days!  Yesterday, we flew seventeen flights, and it was very easy to stay aloft for thirty-minute flights in the L-23.  Multiple members reached sixty-five hundred feet MSL.  Bob C in his Russia glider stayed aloft for more than three hours.  Bob said that he never got higher than about seven thousand feet MSL, but he flew north towards Herman, NE, crossed the Missouri River and flew over the DeSoto Bend Wildlife refuge for a while, and eventually flew back to Blair before the thermals died.
.
Flights started with Lexy H and Steve R, with three short flights to 2,000′.  Next was Harold B, who flew two FAST Kit flights, and decided to join OSCI – welcome Harold!  Harold and his wife Eddie are from Auburn, NE.  Harold has 200 hours in powered aircraft, and 38 in motor gliders; in fact, he owns a motor glider.  After Harold’s two flights, Jake K flew three flights, completing his Annual Safety Flight, plus getting his back seat endorsement.  Jake says he is thinking about getting his Commercial endorsement, and he also mentioned earning his CFI (although he didn’t specifically say CFI-G).  Bob A. flew a thirty-minute solo in the L-23, and then Bob C. was launched in his Russia, followed by Dave L. for his safety flight.  I followed Dave for a thirty-minute solo flight.  Jeff F. flew a thirty-minute flight with Steve, prepping for Jeff’s Check Ride later this spring.  Jeff followed that flight with a quick solo pattern tow.  Lexy finished the day with Steve, flying three pattern tow flights.  Steve did all the instructing and Frank towed.
.
The doors have been replaced on the Pawnee’s hangar!  The new doors can be opened using two or three fingers – they move so easily!  No more jumping the roller tracks and having to MacGyver the door back into place!  So nice!
.
In other news, Jay B., Bob D., and Jim C. are on a road trip.  Bob took his Russia glider, and Jim took the Club’s L-33.  Here’s a photo of the two gliders assembled and ready for flight:
. 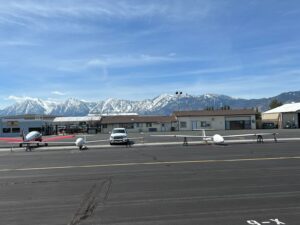 .
Those aren’t the Loess Hills of Iowa in the background!  They’re all the way out in Minden, NV.  Today is predicted to be a great soaring day for them, with strong thermals.  More photos and details about their experiences will be posted in the next Soaring Report.
.
Thanks all!
.
Tom