Hi, all:
Wow, a beautiful day today, with a lot of flights and club accomplishments.  We flew a total of twenty-five flights today, and two were the first solo flights for two of our youngest members.  Congratulations to Lexy H, age 15, and to Liam S, age 14, for successfully completing their first solo flights! 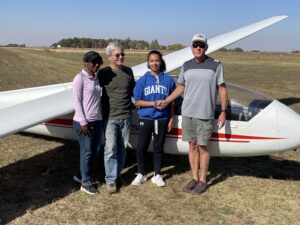 15-year-old Lexi H, surrounded by her folks and CFIG Steve R, after her first solo flight.

Sixteen of today’s flights were flown in the L-23 and seven were flown in the 2-22.  Also, Jeff F. flew two flights in his 1-26.  Steve R. and Dan P. did the instructing and Bob Dyer did all the towing.  There was no lift at all today; the air was as smooth as glass.  However, it was very nice to have winds that were less than seven knots all day.
In other news, this has been a great year for our soaring club.  The list of accomplishments continues to grow, as shown above.  Another accomplishment is to the exterior of the public restroom.  With the approval of the Blair Airport Authority, and with paint supplied by them to us, repairs were made to the siding on the public restroom, and then fresh paint was applied to the siding, the trim, and the door.  It looks much nicer than it did, and further damage to the siding should be prevented: 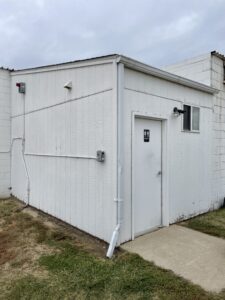 The Public Restroom – Before 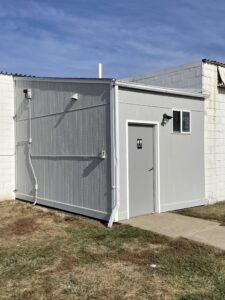 The Public Restroom – After

Our next project will be to the additional hangar ‘office’ that the Airport Authority has given us access to.  It’s pretty nasty right now, but we’re going to fix that.  What that room will be used for remains to be seen, but there are a couple of ideas being floated around.
Thanks, everyone!
Tom